Posted on January 22, 2012 by Christine Negroni

A heron seen on the Wekiva River in Orlando.

A partial list of the critters I have seen while kayaking would include, alligators,  dolphins, water snakes, ducks (duh!) eagles, hawks, ospreys, anhinga and snapping turtles. Just listing all the wildlife makes it sound as if kayaking was a chaotic experience. In fact, it’s just the opposite. Read more »

Ahalan! New Flights to Jordan. What Could Be More Welcome?

Posted on January 8, 2012 by Christine Negroni

With UK based budget airline easyJet offering service to Queen Alia International Airport in Amman, more visitors from Europe have an opportunity to visit this exciting country, which today’s New York Times Travel section includes among its list of 45-places to visit in 2012.

When I saw Jordan on the list it stirred memories of my trip there a few years ago. I had less than a week so I did a quick hit of three important sites.

The river Jordan. Israel lies on the other side.

The River Jordan – There’s not much water left in the Jordan River and what is there is brown with the silt of the earth at its banks, but during my visit to the site where Jesus was baptized I felt a flood of emotions. Read more »

People Who Move You on the Journey

Posted on December 30, 2011 by Christine Negroni

We were greeted at the airport with coffee and flowers.

Over dinner, when I asked my travel companion, the Belgian journalist, Raphael Meulders, what he enjoyed most about our day traveling in northwest Ethiopia, he hesitated about two seconds and answered, “the people”.  I know just what he means. Read more »

Moving Mountains One Strike of the Chisel at a Time

Posted on December 21, 2011 by Christine Negroni

The church of St. George. Photograph courtesy of John Miller.

Several centuries ago, long before power tools, an Ethiopian king by the name of Lalibela had the big idea to build a church out of the side of a  mountain. He didn’t see the challenges, or if he did he didn’t let them get in his way. King Lalibela saw the monumental rock as a source of building material and perhaps he even drew inspiration from Christ’s promise to the disciple Peter, “Upon this rock, I shall build my church.” And so King Lalibela did build a church. Read more »

Don’t Let the Thorn Trees Hit You as You Leave

Posted on December 9, 2011 by Christine Negroni

By far, my most exciting transport experience has been flying with acrobatic pilots, which I have been privileged to enjoy twice: Over the Arizona desert with Gil Monte, a flight instructor for Lufthansa and once off the coast of New York, with Air National Guard show performer John Klatt. But I don’t think I was ever in as much danger as I was on Thursday when I arrived in Zimbabwe and decided to ride in an open-air, game-viewing  vehicle through the streets of Harare. Read more »

A First and Brief Taste of Ethiopia

Posted on December 9, 2011 by Christine Negroni

Like the opening scene in the Mel Brooks comedy, High Anxiety, where all the passengers on the airplane have their faces plastered to the windows so they can look at the scene below, I too, kept my eyes outward on my flight on Thursday on Ethiopian Airlines. I was flying from the capital, Addis Ababa to Harare in Zimbabwe. This would be my first time visiting sub Saharan Africa so I was very excited, very eager to get an eyeful ASAP. Unfortunately, the view of Africa from 37,000 feet doesn’t look that much different from the 37,000 foot view over other continents. Still, my Ethiopian experience, started before I boarded the plane in Addis Ababa. Read more »

Copenhagen’s Message to the World, “Saddle Up and Ride!”

Posted on December 1, 2011 by Christine Negroni

Everyone seems to bike in Copenhagen. Photo by Kasper Thye

There are five and a half million people in Denmark – one quarter of them live in the  Copenhagen metropolitan area. But their small numbers belie the important message they have for the world.  “Save the environment, one person-propelled trip at a time.”

The Power of Positive; a Thanksgiving Airline Story

Posted on November 23, 2011 by Christine Negroni

Southwest has a luv-ely Thanksgiving story

Good travel is highly dependent on bringing along a good attitude. It is a  self-perpetuating circle and it’s the GO HOW philosophy.  This is why I was so enchanted by the story today of airline passenger Rowland Wickes Forensbee who learned how powerful simple gratitude can be.

Demanding Chocolate On Every Flight

Posted on November 12, 2011 by Christine Negroni

Lina Abdo center with hat, with marines at her booth

Like the perfect hostess she is, Lina Abdo can see the connections most folks miss. God bless her. On Friday,  she found a way to link chocolate, Veterans Day and travel at the 14th annual New York Chocolate Show.

Hundreds, nay thousands were packed in to the Metropolitan Pavilion for the show, sampling chocolates in every conceivable size, color and flavor. But the two marines who wound up at the display belonging to Lina’s little business, Les Cinq Amandes, were treated to sweets, sweet thanks for their service and made to feel like rock stars. Read more »

Ready to Roll in Copenhagen

Posted on November 8, 2011 by Christine Negroni

I’m very excited about my upcoming trip to Copenhagen because I want to see for myself if it lives up to its billing as the world’s most bike-friendly city.  It boasts some pretty impressive figures. 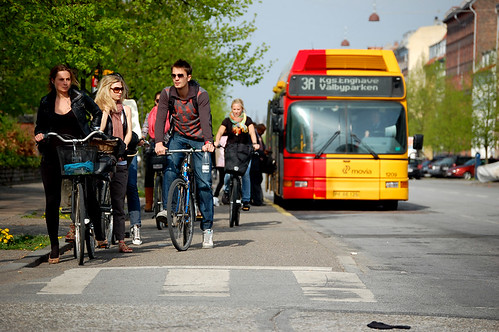 So devoted to their bicycles are the Copenhageners (Copenhageners? can that be right?)  even rain doesn’t dissuade them from riding. They open up a big umbrella and keep on rollin’. I’ve seen the pictures.

Donchaknow I’ll be on a bike as soon as I possible after landing in Copenhagen and I’m packing my New York City subway umbrella just in case.

In the spirit of sharing everything that moves me on my journey, here’s a list of some of my favorite places to ride a bike. Read more »